Our unit not only has the ionizing detox component, it has a frequency generator so you get a good, clean detox through your feet and end up feeling great. It’s amazing the stuff that’ll come out of your body. Here’s a few photos of what it often looks like after a relaxing 45 minutes.

Our BodyGuard machine is more than just an ionic detox foot bath.

At the seashore, waves carry enough kinetic energy to ionize water. The power of the waves knocks off an electron from water molecules, which allows the components of hydrogen and oxygen to be released into the air leaving the negatively charged electron in the water and on the sand of the wet beach. You experience the energy of extra oxygen in the air. You experience the pulling of positively charged electrons from your body along with whatever toxins are associated with those positive ions and they are left in the wet sand. The BodyGuard creates the same ionic reaction in the basin of water. A direct current of 13.8 volts knocks off the negative electrons to separate the hydrogen and oxygen in the water molecule allowing them to escape into the air. This leaves the negatively charge electrons in the water. This negative potential attracts positive ions in your body that are connected to toxins, chemicals and heavy metals, and pulls them out via osmosis through the lymphatic system, muscle and skin. The BodyGuard uses an isolating transformer as a safety measure. The 120 or 240 volts alternating current (AC) coming from the wall outlet has no physical connection with the 13.8 volts direct current (DC) going into the ionic bath water. The two Stainless Steel plates sometimes known as ‘The Array’ are the Frequency Generators, energize our bodies with a positive square wave frequency, which strengthens our immune system and organs. That flow of electrons changes the terrain of our body, which repels pathogens, bacteria, fungus, viruses thus allowing our bodies to acquire a state of balance and health. For the elimination of heavy metals, toxins, poisons, chemicals, drugs and other destructive elements, you may submerge either your feet or your arms into the ionizing bath water. The Frequency Generator is used for the elimination of parasites, fungus, bacteria, viruses and has been used to neutralize the poisons of insect bites. These two devices may be used together or separately. Toxins build up in our bodies over the years. This build up compromises our immune system and leaves us open to disease. This is the main reason that our bodies feel run down and tired. This affects us at all levels… physical, mental and emotional. It is so important to eat a balanced nutritious diet and get plenty of fresh clean air, exercise and rest.

(click to call) NOTE: When you call, mention the ‘drive by detox foot bath special’ or you’ll pay full price.

Our cross streets are 7th St & south of Thomas Rd 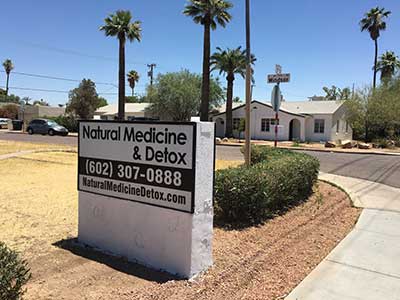 See If We Take Your Insurance

Click the Button & Fill Out the Quick Form. It only takes 17 seconds...